Interest in oil-less, hot airfryers has really taken off in recent years, partially fueled by claims that airfryers let you enjoy your favorite fried foods with just a fraction of the calories. Since calories are the only part of fried food everyone dislikes, this claim has been met with a lot of excitement and a fair bit of skepticism. Anything too good to be true unusually is, but not in this case. Airfryers don’t cook food like a deep fryer, but they are a healthier way to enjoy fried foods like French fries, fried chicken, or fried calamari.

How Unhealthy Are Deep Fat Fryers?

Deep fat frying has been around forever. The ancient Egyptians first experimented with it as early as the 5000 BC. The Greeks enjoyed frying their food in olive oil and the Romans even had their own fried chicken recipes. Deep fried funnel cakes were invented in England around the 13th century, the French started frying mozzarella sticks in the 14th century, the Japanese started frying tempura in the 16th century, and the Belgians created the first French fries in the 18th century. It wasn’t until the rise of modern science that people took a hard look at the way these foods affect our health, and what they found wasn’t good. Deep frying food drastically increases the number of calories it contains and adds a lot of fat to your diet.

There are several different types of frying – pan frying, when you coat the bottom of the pan in oil, shallow frying, when the oil reaches part way up the sides of the food, and deep frying, when the food is fully submerged in oil – but they all work on the same basic principle. When you place food in heated oil, you initiate a rapid heat transfer. The food begins absorbing the hot oil through every nook and cranny on its surface. The heat sets off a series of Maillard reactions, which causes sugars and amino acids in the surface of the food start to break down. The food browns and it creates a wide range of pleasant tastes and aromas. At the same time, the heat dehydrates the surface of the food, creating a crispy outer crust that prevents the oil from penetrating deeper into the center. Meanwhile, the interior of the food heat up and cooks. Starches gelatinize, proteins denature, and fibers soften. Your food ends up warm and moist on the inside, but has a strong, crispy crunch on the outside.

Why Deep Fat Frying is so Unhealthy

Unsurprisingly, deep fat frying causes your food to absorb quite a bit of oil, roughly 8-25 percent of its weight, depending on how long the food is left in the fryer and what type of food you’re cooking. Oil and water are immiscible, which means they can’t be mixed together. Until you stick it in the fryer, the residual water in your food prevents it from absorbing oil. It’s only once the food’s been exposed to heat that the oil can get it. As the water gets boiled away, the oil seeps in to replace it. The amount of oil your food absorbs is directly proportional to the amount of water it gives off as it’s fried. The sizzling that occurs when you place food in a deep fryer? That’s steam escaping your food. The longer is sizzles, the more oil seeps in.

Some foods release water faster than others, so it’s possible to deep fry different foods for the same amount of time and end up with some very different calorie counts. It’s harder for water to escape from dense foods like chicken than it is from porous foods like tortillas or potatoes. This is why chicken will only gain about 64 percent more calories after they’re deep fried while tortilla chips will gain about 124 percent and French fries will gain about 368 percent more calories. Coating your food with bread or batter has an even more dramatic impact on calories. Breaded chicken will gain 128% more calories after it’s been deep fried compared to ordinary, skinless chicken.

The reason for this dramatic increase is the oil. It’s essentially just pure fat, which is naturally high in calories. One cup of olive oil or peanut oil contains 1904 calories and contains approximately 332 percent of your recommended daily fat intake. A cup of corn or vegetable oil contains 1927 calories and 335 percent of your daily fat intake. One cup isn’t a lot of liquid, only eight fluid ounces. A normal deep fryer uses somewhere between four and sixteen cups of oil in order to cook your food, so it’s small wonder that it adds so many extra calories. The effect gets worse the longer you cook. As oil is heated, it’s able to blend with water more easily, which means it soaks into your food and increases the calorie count even faster.

A Myth About Deep Fat Frying

It’s a common misconception that frying your food in better oil will reduce the amount of oil your food absorbs. The theory is based on the fact that every oil has a different smoke point. When oil is exposed to heat, it gradually breaks down until it starts emitting smoke. Cooking with smoked oil ruins the taste of your food. The oil releases a compound called acrolein, which leaves an acrid taste in everything it touches. The oil in a deep fryer is normally heated to 350-375°F, but some suggest switching to an oil with a smoke point well above this, like peanut oil. The thinking is that with this oil you can turn the temperature way up and cook the food faster in order to prevent it from absorbing as much oil. Unfortunately, because oil is absorbed as water is released, increasing the cooking temperature actually increases the rate of oil absorption. The faster the water is boiled off, the faster the oil can get in.

Why Airfryers are Healthy

When you fry food with an air fryer, all you need is a thin layer of oil, about a tablespoon or less, which contains only a sixteenth as many calories as a full cup and about 21 percent of your recommended daily fat intake. This gives you a crisp that’s very similar to a deep fryer, with only a fraction of the calories.

Airfryers don’t fry food in the traditional sense. Instead of submerging your food in oil, they circulate hot air around the food like a convection oven, cooking it from all sides simultaneously. Once you place your food inside the airfryer, a metal heating coil above the food is activated. As the coil warms up, it radiates heat down onto the food below. At the same time, a high speed fan above the coil blows air down through the heating coil. As the warm air hits the basket, it flows over the contours of your food, ensuring the heat is evenly distributed throughout the fryer. The heating coil is powerful enough that takes only three minutes for the fryer to reach its maximum cooking temperature. Its small size keeps the heat concentrated around your food, and as it warms up, so does the oil. Just like in a traditional fryer, the hot oil dehydrates the surface of the food and creates a crispy outer crust that seals in moisture and flavor. Steam and other gases are released out a vent in the back of the unit and excess oil drips down into the grease pan underneath the food basket.

Almost anything you can cook in a deep fryer can be cooked in an air fryer and the difference between air fried food and deep fried food is pretty stark. Air fried food contains up to 70 or 80 percent fewer calories and a whole lot less fat, sometimes as little as three percent, compared to deep fried foods, which can contain up to 24 percent fat.

The only downside of frying with an airfryer is that because it uses air instead of oil, it doesn’t transfer heat quite as well as a deep fryer. This means the outer surface won’t dehydrate as thoroughly, so it will never be as crispy as it would be if you cooked it in a deep fryer. The inside will still be moist and tend, but the crunch will never be as rich or as full. It also limits your choice of coating as well. Though it’s easy to air fry breaded foods or food covered in a dry rub, batters tend to get blown off by the fan. 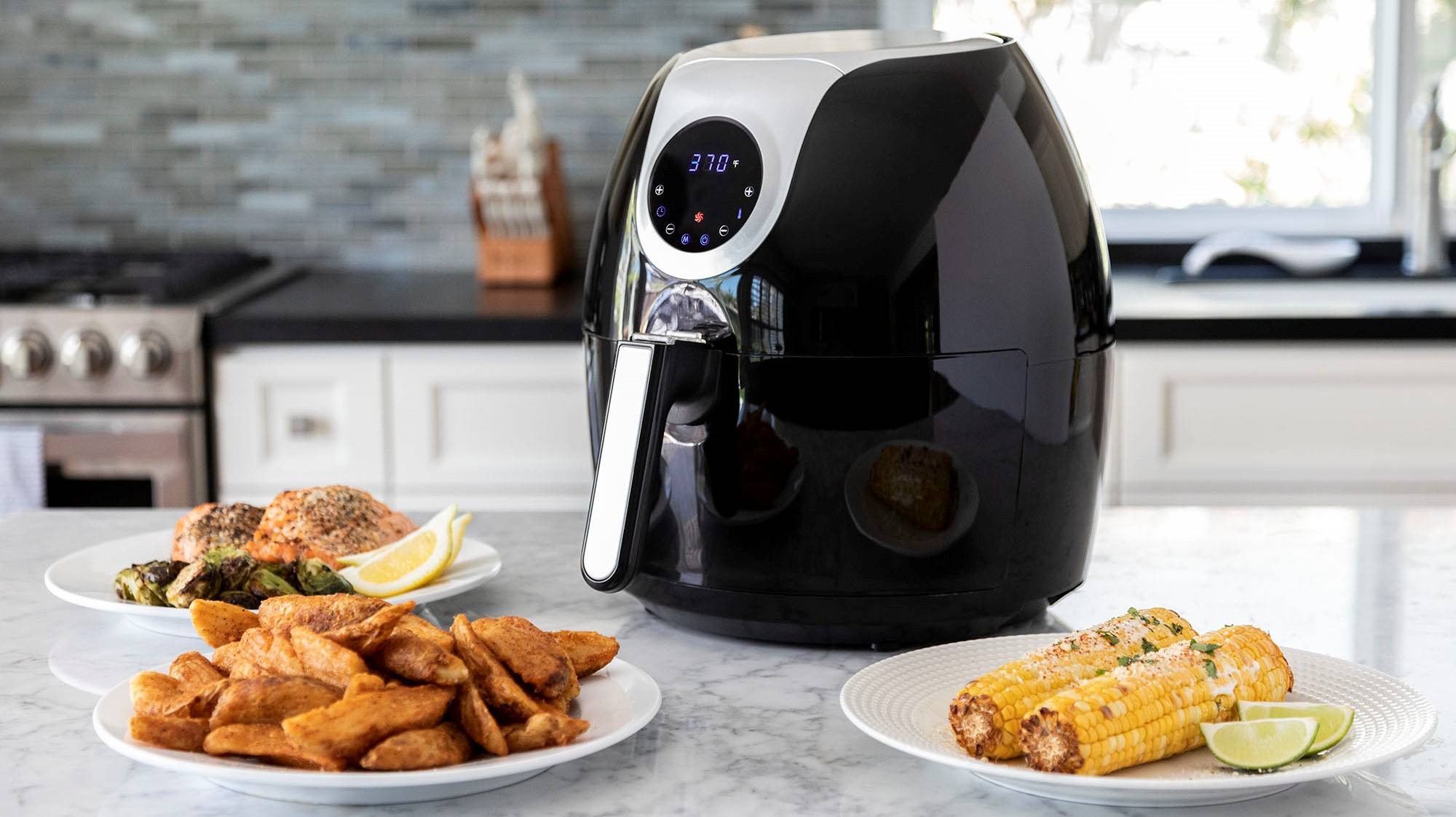 We can't get enough French fries. We eat them for lunch, for dinner, as a meal, as a snack, whenever and wherever we can. You Read More How the Airfryer was Invented - Airplanes and Frozen Food

"In the late 1930's, a man by the name of William Maxson was growing cauliflower in his home garden in West Orange, New Jersey. One year, Read More