There are three reasons why Cuban cigars enjoyed such a stellar reputation: climate, soil, and experience. Cuba has the right temperatures, the right humidity, the right soil, and the right minerals for tobacco. At their height, they has the world’s best tobacco farmers and cigar rollers as well, experts who understood how to cultivate, ferment, and age tobacco, and how to bind it into a balanced, flavorful cigar. The techniques and traditions were pioneered on the island and passed down from father to sons and daughters until the revolution in 1959, which disrupted the Cuban cigar industry. Many manufacturers fled the island in the early 1960’s and set up new factories outside Castro’s control. You can still find great cigars on Cuba, but you can find them elsewhere too – Honduras, Nicaragua, and the Dominican Republic – and this is the reason why many people consider Cuban cigars overrated.The first cigars ever made were smoked in Cuba. T

he ancient Tainos tribes people who originally inhabited the island would roll up dried tobacco  in palm leaves and smoke them. They were  a crude cigars by modern standards, but Christopher Columbus and his crew were so taken with them when they arrived in 1492 they adopted the practice and brought it back with them to Europe. By 1495, smoking had become  widespread and Spain was building cigar factories in Seville to meet demand, factories that used only Cuban tobacco. It was so highly regarded, in 1717 the King of Spain declared a royal monopoly on Cuban tobacco and began importing it by the ton to supply Spain’s cigar industry. Cuban cigars didn’t emerge until restrictions were eased in 1821, when Cubans were allowed to build their own cigar factories. By 1859, there were over 1300 of them, and 10,000 tobacco plantations all over the island. By the early 20th century, Cuba was the world’s leading producer to premium cigars. By the late 20th century, their status had reached mythical proportions in the United States, but was it because of the quality of the cigars or was it a side effect of the embargo? What’s the truth about Cuban cigars? Are they worth the hype? One thing is still certainly true about Cuba. It has some of the best conditions for tobacco in the entire world.

In order to get the lush, broad tobacco leaves used to make first-class cigars, the growing conditions have to be just right. If it is too dry, too wet, to warm, or too cold, it will stunt the plant’s growth and create small, bitter leaves. The humidity has to be just right as well. After tobacco is harvested, it has to be dried, cured, and fermented. This process breaks down the chlorophyll in the tobacco laves and transforms the starch into sugar, releasing all the natural flavors and aromas that give a cigar its character. If the humidity’s too low, the leaves will be too dry to ferment. If the humidity’s too high, they’ll ferment too fast and overcook the tobacco.

Located just south of the tropic of cancer, Cuba offers an almost perfect climate for tobacco farmers. The temperature is a constant 77°F and humidity is stable, about 79 percent year round. In fact, the tropical conditions here are so good, they’re the basis for the 70-70 rule cigar owners use to preserve their cigars. The island also receives a large amount of sunshine and rain, which makes it easy to cultivate, cure, and ferment high-quality tobacco.

Tobacco’s flavor comes from the soil it’s planted in, and Cuba has some of the best. Most of the soil in the Caribbean was pushed up from the ocean floor by volcanic eruptions and tectonic collisions fairly recently in the geologic past. It’s loose, sandy, granular, and loamy. Inhospitable to most traditional farm crops, but ideal for tobacco. The soil in Cuba’s primary growing regions has the consistency of pulverized rock, with unusually high levels of iron, quartz, and clay deposits that give Cuban tobacco a unique, peppery taste. Rival growers in Nicaragua, Honduras, and the Dominican Republic have attempted to replicate it, but none have been able to capture the same, singular flavor of Cuban tobacco. It’s simply one of a kind.

There are five tobacco growing regions in Cuba: the Vuelta Abajo, the Semi Vuelta, the Partido, and the Vuelta Arriba. The primary growing region is the Vuelta Abajo in the west. It has the finest soil and it’s the only region where every type of leaf for cigar production is grown: Volado, Seco, Ligero, Medio Tempo, binder leaves, and wrapper leaves.

The final reason why Cuban cigars are so good, and the reason why the reputation of Cuban cigars has slipped over time, is the traditions and experience of Cuba’s cigar manufacturers. Tobacco is a delicate crop that requires lots of care and attention, and seasoned growers and cigar rollers are key. Cultivating the right blends for a premium cigar requires a sharp eye and intimate knowledge of the tobacco plant. Cuba has been growing tobacco for centuries, and it’s honed its traditions during that time.

Tobacco seeds are planted in narrow nursery beds. These were once outside, but now are usually specially designed water trays fed with fertilizer. The plants are placed into soil pots and immersed in the water for the first 45-50 days of germination. During this time, the soil outside in the fields is tilled, often by hand or using oxen, and a layer of fertilizer is added. When they’re ready, the seeds are removed from the water bed and planted individually by hand, about 300 seeds per hectare. After three or four weeks, farmers return and pile dirt up and around the base of the plant in order to strengthen the root system. Once the plant grows to its desired height, about six feet, the top bud is snapped off. This helps the leaves grow, but also causes side roots to sprout from the base, which have to be trimmed back every few days. Constant irrigation has be carried out as well, and plants designated for wrapper leaves have to be shaded by muslin canopies 10-20 days after they’ve been planted. Forty days after they’ve been planted, harvesting beings.

Tobacco harvests proceed in stages over several days. Each leaf contains different amounts of flavor depending on what part of the plant it comes from. The bottom leaves (Volado) are picked first. They’re used as fuel to keep the cigar lit. Once they’ve been collected, the farmers return to the field and pick the middle leaves (Seco), which are stronger and used to create the cigar’s aroma. Finally, the top leaves (Ligero) are removed. They’re what give cigars its body and flavor. Tobacco leaves mature at different rates, so they can’t be harvested en masse like grain or wheat. They have to be evaluated individually in order to determine which ones have ripened and are ready for picking. It takes a skilled farmer, or veguero , to produce good tobacco leaves. Once the leaves have been harvested, it takes more skilled labor to transform them into a cigar. The leaves must be sorted by hand according to size, shape, and quality. Once they’ve been dried, aged, and fermented, they’re sorted by strength, bunched into blends, and passed along to the cigar rollers. Each bunch contains carefully chosen portions of Volado, Seco, and Ligero leaves that create the full bouquet, taste, and aroma required for a good smoke. The rollers then bundle the leaves together and make them into a cigar. They control the shape, consistency, and draw. They need to know how much tobacco to put in, how tight to wrap it, and the right proportions for each ring size and cigar length.

The average cigar roller makes 100-150 cigars a day. That’s three minutes for each cigar. They have to be able to gauge the texture, weight, and construction of a cigar by feel. It takes years to learn the craft and there’s no formal training program. The techniques are passed down from person to person, generation to generation. Cuba has some of the best cigar rollers in the world, using skills honed through centuries of experience.

Struggles Since the Revolution

Because of its unique environmental conditions and long tradition of cigar making, Cuba was practically the only source for premium cigars in the United States and most of the world until the communist revolution in 1959. After Batista fell, Castro and his communist government seized control of Cuba’s cigar plantations and factories. Many of Cuba’s top producers fled and established themselves in nations with climates and soil similar to Cuba’s: Nicaragua, Honduras, and the Dominican Republic. They used their experience to set up new factories and plantations, recruited and trained new farmers and cigar rollers (some of whom were Cuban refugees), and worked the land in order to replicate the growing conditions in Cuba. To a large extent, they succeeded. Though they have never managed to duplicate the taste of Cuban cigars, they were able to match their quality. In fact, most of the premium cigars sold in the United States today comes from factories built by Cuban refugees in the Dominican Republic. These Cuban expats even won the right to sell cigars using the names of the companies they’d abandoned in Cuba: Partagas, Punch, H. Upmann, Hoyo de Monterrey, and Montecristo.

The departure of so many experienced farmers, rollers, and manufacturers hurt the quality of the cigars made on the island. The industry took another hit during the “cigar boom” of the 1990’s. After years of declining cigar sales, demand suddenly skyrocketed and the Cuban government rushed to take advantage. They planted tobacco on poor soil to expand their tobacco plantations. They reduced curing and fermentation times in order to increase production rates, and hurriedly trained new rollers to churn out cigars. The result was a flood of cheap cigars packed with low-quality tobacco that were almost unrecognizable as Cuban.

Cuban cigar manufacturers learned from their mistakes, though. As the cigar boom ended, Cuba cut back its production quotas, placed a fresh emphasis on traditional growing techniques, and re-imposed tight quality controls in their factories. Their efforts reversed the decline. Between 2004 and 2014, Cuban cigars were ranked as one of the top ten cigars produced in the world, winning the number one spot three times.

As impressive as this accomplishment is, it illustrates a hard truth. Cuba is no longer the sole producer of premium cigars. Rival industries in neighboring countries, most of them founded by Cuban refugees using Cuban traditions, are at least as good. The truth is that whether Cuban cigars are worth the hype is a matter of taste. Most of the hype surrounding them is a product of the embargo. People covet what’s forbidden. Of course, many people still find the flavor of Cuban cigars uniquely appealing, and Cuban cigars are still very good, some of the best in the world, but if you’re in the market for a premium cigar you don’t have to go to Cuba. You can find them in Nicaraguan, Honduran, and the Dominican as well.

If Cuban cigars are still the only ones for you, there’s a number of excellent brands still manufactured on the island. They can’t be imported directly, but they are widely available in countries outside the United States.

Make sure to check the brand carefully before purchasing. A number of classic Cuban brands are made outside Cuba as well, by factory owners who fled the Castro regime. Check their website to make sure you know which you’re buying. 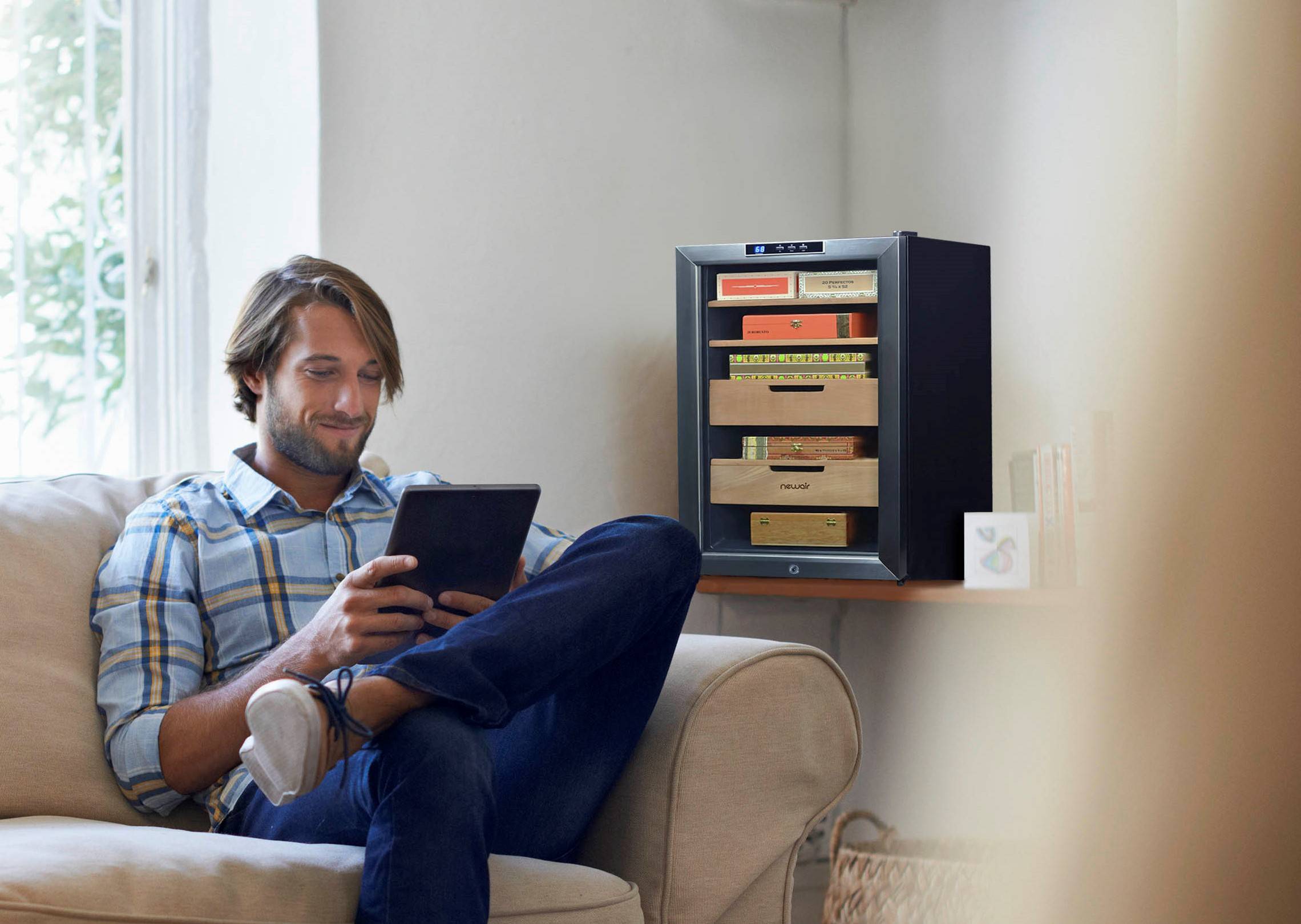 What Is a Humidor? Here's Everything You Need to Know About How Humidors Work

If you have even a passing interest in owning cigars, it won’t be long before you need to think about cigar storage. Cigars require very specific Read More