Not all air conditioners are made equal --- and some are much worse for the environment than others.

To understand how a portable AC saves the planet, you must first understand why non-portable air conditioning is harmful to the environment. Prepare yourself for a few big words! The Problem Centralized air conditioners, put simply, rely on electricity to produce an effective cooling system. And as climates get increasingly hotter, we need to use these cooling features more often to increase our comfortability indoors. It seems harmless, right? Well, not entirely. The main problem with increasing AC usage is that these systems actually warm up the Earth as they cool you down, resulting in a vicious cycle that leaves a negative mark on our planet. Essentially, AC relies on electricity and, in turn, that electricity uses fossil fuels to generate cool air into your home. And as it runs, your centralized AC emits carbon dioxide and greenhouse gas into the atmosphere, which contributes to global warming and climate change. Another part of the issue is that centralized systems stay in one place. And without being transported to the room-in-use, your AC must generate all that cool air into your home from one spot. This means that your unit will have to run for longer periods of time to reach the far ends of the house. The square footage of your home plus vaulted ceilings will require extensive amounts of time to cool, which also drives up the cost of your electricity bill. So when you use centralized air conditioning systems, you’re not only making your AC work overtime to cool the entire house from one spot, but you’re also making the planet work overtime by emitting more carbon and greenhouse gas into the atmosphere --- yikes!

Behind the Scenes We want you to feel as informed as possible, so we’re going to break down a few more details about centralized cooling systems and their impact on the environment. Buckle up because we have a crash course of everything you need to know! Originally, a majority of air conditioners relied on the use of chlorofluorocarbons (CFCs) and bromofluorocarbons (BFCs). However, these compounds are extremely harmful to the environment, specifically when they are released into the atmosphere and impact the ozone layer. So by the late 1990’s, the use of CFCs and BFCs were discontinued in air conditioner production, as well as other appliances. Despite these efforts, the compounds that functioned as a substitute still have an environmental impact --- just not as severe. The hydrochlorofluorocarbons (HCFCs) and hydrofluorocarbons (HFCs) that replaced their predecessors are less destructive, but they do negatively effect the stratospheric ozone. While these compounds still pose a threat to the planet, the U.S. Environmental Protection Agency (EPA) is looking for solutions to phase out these compounds and reduce their contribution to global warming overall. What Can You Do? Most of us are ethical people who want to be as kind to the Earth as possible.

So what can you do to help reduce your carbon footprint?

Don’t worry -- we won’t ask you to forfeit your perfectly air conditioned home this summer! Instead, the answer is much more simple, easy, and attainable than you may think. Use a portable air conditioner! Okay --- you may have seen that coming based on the title of this post. But your contribution is greater than your purchase at Newair.

By using a portable AC, you’re actually being energy-efficient and doing your part to help the planet! Even so, how will you know which one is right for you? You can start by looking at the amount of British Thermal Unit’s (BTUs) your portable AC can generate. Every Newair product lists the BTUs for the air conditioner you want, and a general rule of thumb is that the higher the BTU, the more powerful the unit will be. It’s also important to pay attention to the square footage you’re looking to cool. Even though you can move your unit to different spaces, you should decide which areas you will place it. Make sure you choose a portable AC that can cover the square footage of the rooms you will be cooling. Newair Products for You What if we told you that Newair has stunning portable air conditioners that will make your ethical purchase look as good as ever? There’s no reason to sacrifice visual appeal for functionality. That’s right --- Newair has options that add a tasteful touch to your home decor. One design that will effortlessly match the aesthetic of your home is the AC-12200E. The slim design makes this unit a fantastic choice for compact spaces, and it has endless opportunities for storage in the offseason. While air-conditioning might be your primary interest, the AC-12200E also has a fan and dehumidifier feature that provides maximum comfort. However, one of the most convenient characteristics is that the venting kit is easily stored inside the unit. No clutter, and no worries! 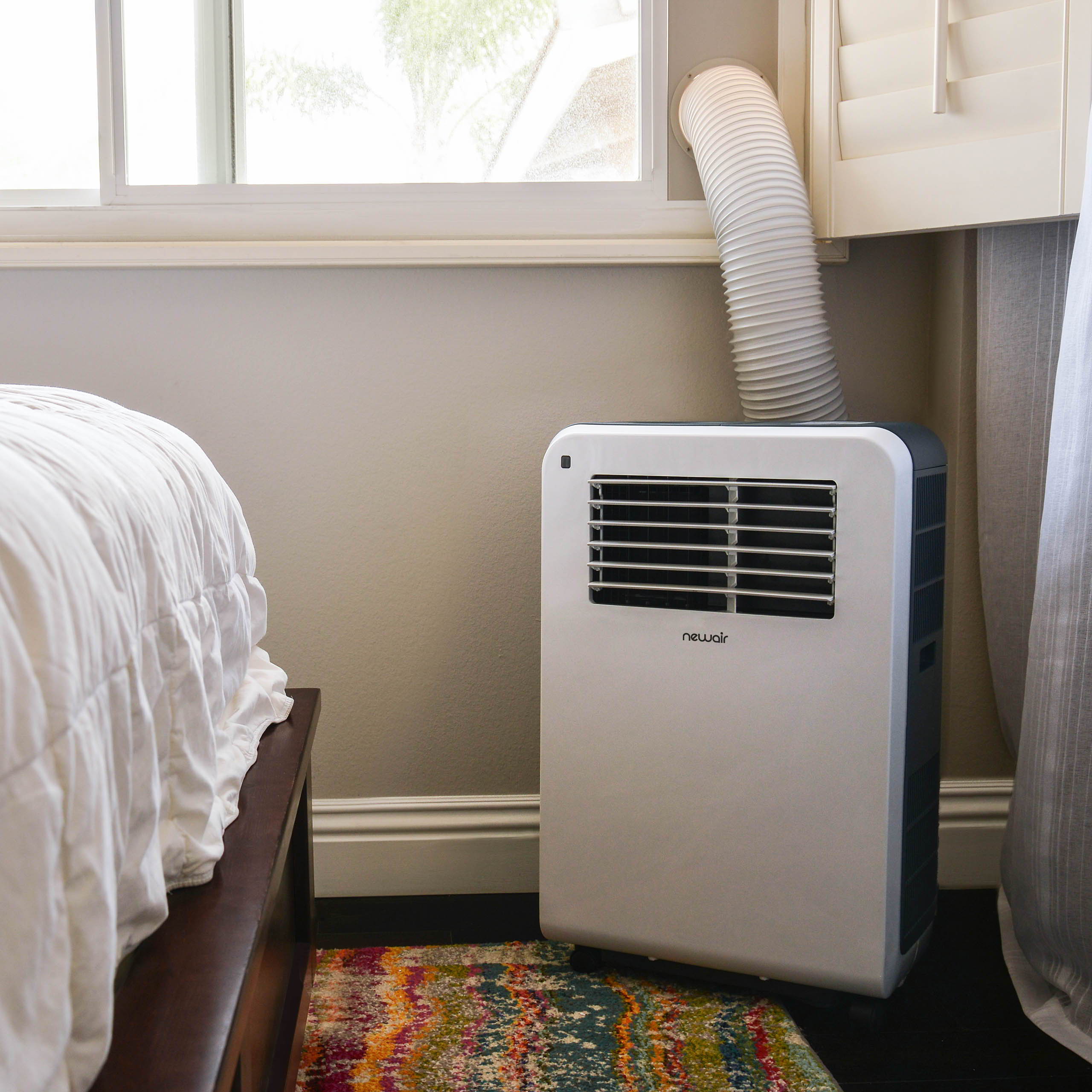 Alongside the AC-12200E is another sleek design: the NAC14KWH02. The all-white look makes for an elegant addition to your home space, and it can evenly cool up to 500 square feet! The portable AC unit can be attached to any window in your home to draw cold air from outside and get rid of the humidity, making your summer one to enjoy. Like the AC-12200E, the NAC14KWH02 is considered an all-in-one unit with adjustable settings, which means that you’ll be able to choose which mode you prefer. Better yet, you can even customize the timer to generate cool air for up to 24-hours, creating a perfectly chilled home space! Newair, New Outlook It’s time to do your part for the environment and choose conscientious products for your home. As global warming and climate change warnings persist, you can have peace of mind knowing that your portable air conditioner is doing its part to be energy-efficient and eco-friendly 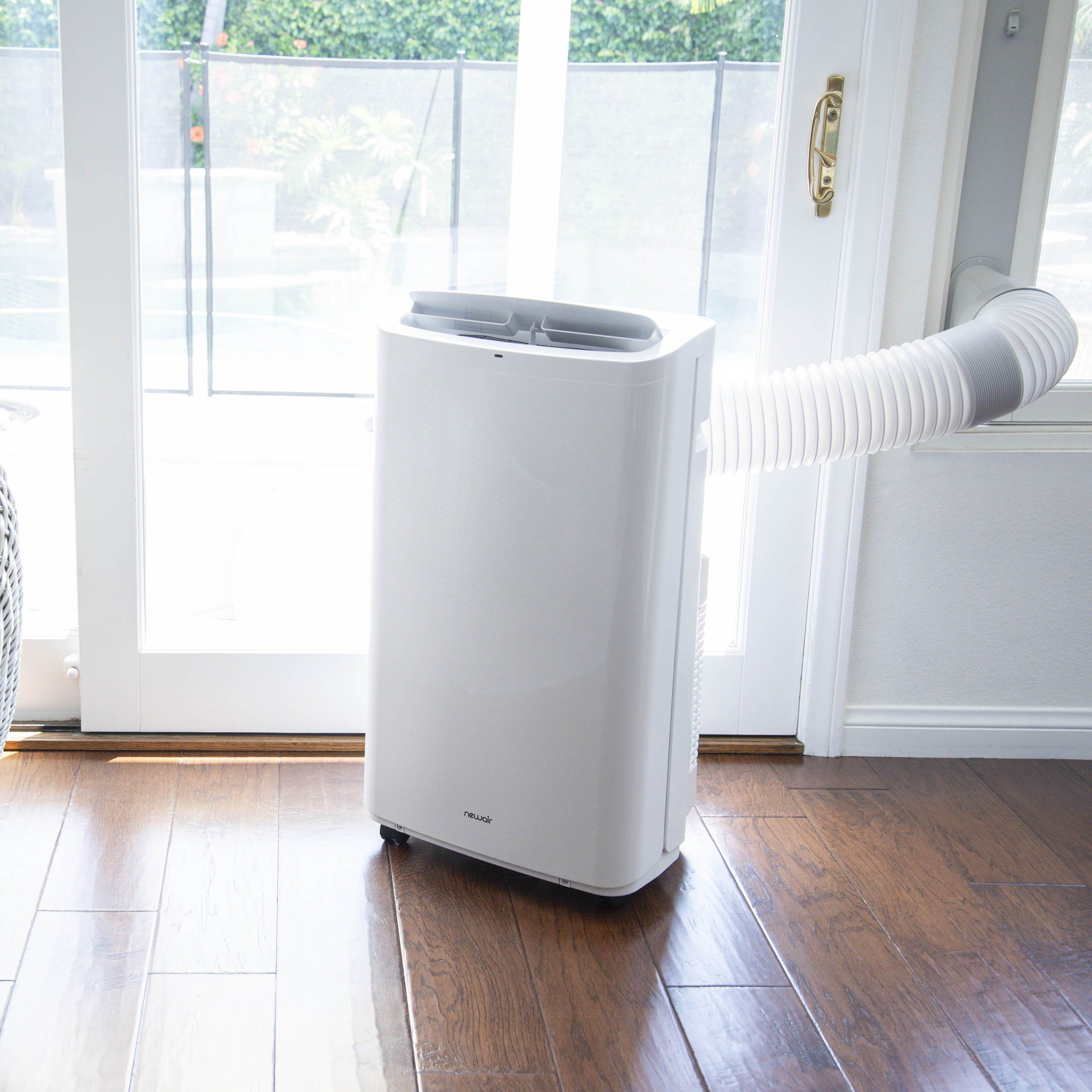