Nature's most efficient means of cooling is through the evaporation of water. Evaporative cooling works on the principle of heat absorption by moisture evaporation.

Evaporative cooler units, also known as swamp coolers, draw exterior air into special pads soaked with water, where the air is cooled by evaporation, and then circulated.

See below for answers to some of the most common evaporative questions we get from customers.

What types of evaporative coolers are available? 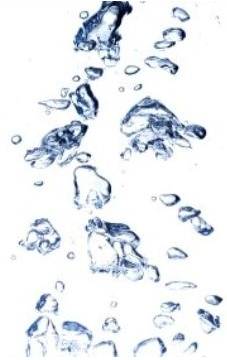 Evaporative cooling is especially suited for areas where the air is hot and the humidity is low. However, in areas of higher humidity, there are many proven, cost effective uses for evaporative cooling that make this the best choice. Here are some examples:

Also, places that utilize spot cooling could use a swamp cooler:

What advantages does evaporative cooling have compared to a refrigerated cooling system?

Evaporative cooling will provide a substantial energy saving over refrigerated air units. The simplicity of the design results in low maintenance requirements. A cooler will also provide fresh, filtered air. The outside air that has been cooled will blow the stale, inside air out. With the substantial savings of energy and the constant changes in the air, a swamp cooler is ideally suited for area cooling or spot cooling of rooms, homes, factories, laundries, churches, schools, agricultural/business areas, restaurants, and more.

What size evaporative cooler do I need?

Swamp coolers are size-based on cubic feet per minute (CFM) of airflow. For sizing information on industrial/commercial coolers, the formulas are located in the specification charts of the cooler considered. When sizing an industrial or commercial cooler, it's important to be job specific to include unusual heat loads and static pressures of the system design. Take a look at our evaporative cooler sizing guide for more information.

How do evaporative coolers work?

Swamp coolers are efficient and effective cooling appliances. As a direct replacement for air conditioning in dry climates, these coolers are an example of how we can work with nature. Being considerably less expensive than air conditioning, it almost seems that one is getting something for nothing when using a swamp cooler.

The way an evaporative cooler operates is very simple. There is a low horsepower motor which pumps the water from the floor of the cooler to the top of the cooler, where it proceeds to fall down the sides and along porous filter pads. A second motor drives a fan which pulls air from the outside, through the cooler, and then pushes this out into the hot room.

The significant cooling action results from the water evaporating as the air passes through it. Incidentally, the water level is kept constant with the help of a floating sphere, functioning similarly to the one in a toilet bowl. The hot air enters the cooler, where two small motors power nothing more than a fan and a pump in order to send cool air into the hot room.

An evaporative cooler produces effective cooling by combining a natural process - water evaporation - with a simple and reliable, air-moving system. Fresh, outside air is pulled through moist pads where it is cooled by evaporation and circulated through a house or building by a large blower.

As this happens, the temperature of the outside air can be lowered as much as 30 degrees. Because evaporative coolers add moisture to the air and blow it around, that is why they are sometimes known as "swamp coolers."

Evaporative coolers can work wonderfully well, provided the outside air they are drawing in is dry and desert-like. As the humidity increases however, the ability for them to cool the air effectively, decreases. Simply put, swamp coolers are not designed to work in swamp-like conditions.

Air conditioning, on the other hand, is popular because it provides cooling independent of the surrounding humidity levels. Even on humid days, room and central air conditioners can lower the temperature to a thermostatically-controlled temperature.

Air conditioners also use as much as four times the electricity as evaporative cooler and are more expensive to install and maintain. Air conditioners can require ozone-damaging refrigerants, not to mention, circulating the same air over and over again. 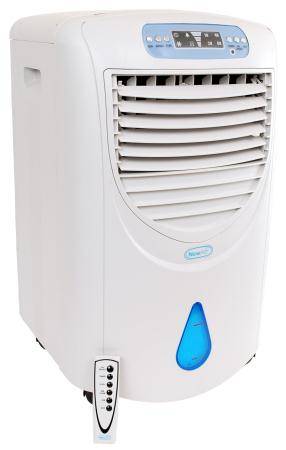 Why does evaporation lower temperature?

The process of evaporation happens all the time. Our bodies, for example, perspire in hot weather. Through evaporation, sweat dries and causes our body temperature to drop. Whenever dry air passes over water, some of the water will be absorbed by the air. That is why evaporative cooling naturally occurs near waterfalls, rivers, lakes and oceans. The hotter and drier the air, the more water that can be absorbed. This happens because of the temperature and the vapor pressure of the water and the air attempt to equalize.

Liquid water molecules become gas in the dry air, a process that uses energy to change its physical state. Heat moves from the higher temperature of the air to the lower temperature of the water, resulting in cooler air. Eventually, the air becomes saturated, unable to hold anymore water, and evaporation ceases.