Wine lovers know that keeping their wine at just the right temperature can make all the difference when it comes to preserving the aroma and tastes of the beverage they best love. That's why wine coolers (sometimes called wine chillers or wine refrigerators) have become such a popular accessory and gift item. While most can't afford to dig an actual wine cellar below their home, wine coolers are an affordable way to store wine safely, in the ideal temperature range recommended by experts.

Aside from size (12 bottles or 52 bottles?) and configuration (single or dual zone storage?) the most important decision you have to make is whether you want a thermoelectric wine cooler or a compressor wine cooler. "Thermoelectric" and "compressor" refer to the technology used to cool down the cabinet. Each type of technology has its advantages and disadvantages, and in this article we'll outline them all to help you make the best decision when you make a purchase.

A compressor wine cooler works pretty much like a standard refrigerator works, except on a smaller scale, using the vapor compression cycle to remove heat from the interior of the cabinet.

A vapor compression refrigeration system (which is the same technology used for air conditioners) relies on a coolant gas (a refrigerant) to carry heat from inside the unit and expel it externally. There are four major parts of the system: 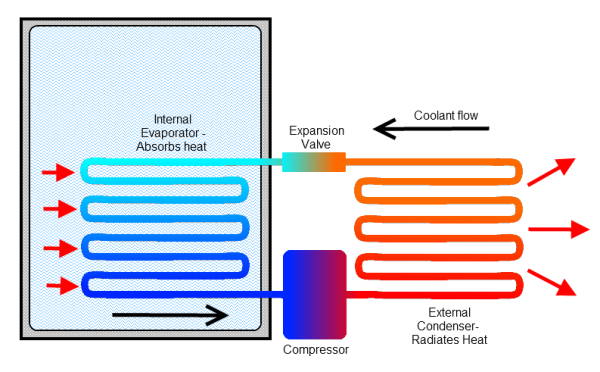 In most wine coolers, the cold air produced by the evaporator is passed through an aluminum panel, which then radiates cold air into the cabinet's interior, lowering the temperature. Some models, like NewAir's built-in wine coolers, also use fans to circulate the air, to ensure more even temperatures throughout.

A thermoelectric cooler uses a different process to remove heat from the interior cabinet, one based upon the Peltier effect, which is named for the 19th century scientist who discovered it.

In this process, an electric current is sent through two pieces of metal that have been joined together. Because the two sides of the device are made of different materials, a heat flux is created and heat flows from one side to the other. One side gets hot while the other gets cold. 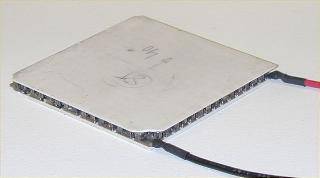 The hot side of the device is attached to a heat sink, a large passive component made up of stacks of aluminum fins that is designed to let heat dissipate efficiently. The cold side is installed inside the cooler cabinet. Heat is absorbed from the interior, passes through the Peltier element into the heat sink, and then dissipates into the air. 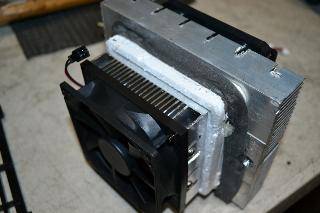 While the Peltier device itself has no moving parts, it is often combined with fans on the interior and the exterior to ensure sufficient air circulation and ventilation.

Now that you understand how both types of system work, we can discuss the advantages and disadvantages of each.

Compressor advantage one: Compressor coolers can get much colder than thermoelectric coolers. 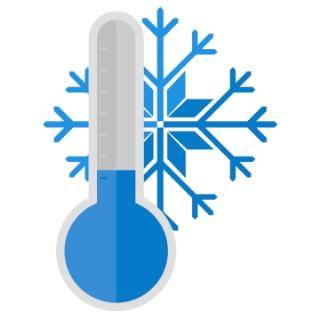 Most thermoelectric coolers won't cool below about 50°F, which means you won't be able to achieve proper serving temperatures for Champagne or other sparkling wines. In addition, thermoelectric coolers aren't recommended for use in spaces that get warmer than 80°. This is because the Peltier device is not capable of great heat flux, and can really only lower the temperature about 20 degrees. If your house is a comfortable 72°F, reaching 55°F in your wine cooler (the recommended storage temperature for all wines) won't be a problem. But when the thermostat begins to rise, you'll have a harder time maintaining that target temperature.

Compressor coolers, on the other hand can reach temperatures in the 30s and have no problem reaching the coldest temperatures any time of year.

Since utility bills are a concern to nearly everyone, it only makes sense to consider how much you'll be paying to operate your wine cooler. But if you simply compare the specifications, then you are missing a big part of the picture. 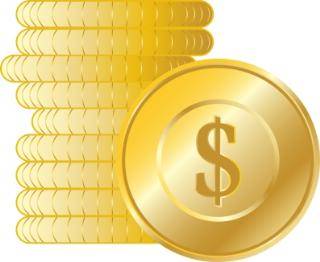 First of all, thermoelectric coolers operate constantly, while compressor wine coolers cycle on and off as necessary to maintain interior temperatures (just like your refrigerator). Not only does the continual power draw mean higher energy bills, the constant use means parts are likely to break down and need replacement sooner.

Secondly, the energy efficiency of a thermoelectric cooler is dramatically affected by ambient temperatures. As described above, thermoelectric cooling capacity can be fairly limited. As the difference between wine cooler and room temperature increases, so does the amount of electricity it has to use to reach that temperature (if it can reach it at all). Compressor units, however, operate much more efficiently in hot weather.

It's also worth pointing out how the energy efficiency in both types of cooler increases depending on the size and configuration of the unit. For instance, a 28-botltle single-zone thermoelectric cooler is listed at a mere 70 watts, while a compressor unit of similar size utilizes 85 watts. Taking the next step up in size, a 33-bottle compressor cooler uses 85 watts, while a 32-bottle thermoelectric wine cooler jumps to 140 watts. The reason for this is that the larger the wine cooler, the more Peltier devices must be installed in the unit to cool down the entire cabinet. A larger compressor cooler may use a larger compressor, but it's still just one device to operate as opposed to two or more Peltier devices. If you're looking for a large-sized cooler for a sizeable wine collection, then you'll get greater operational savings with a compressor unit. 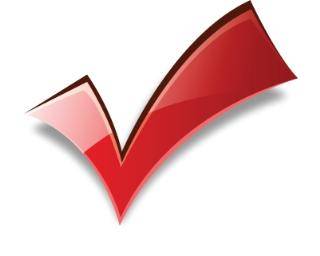 Because there are no moving parts in a thermoelectric cooling system, these wine coolers operate almost silently. In fact, if the cooler is installed properly on a firm, level surface there should be no noise whatsoever. The fans installed in the cabinet might make a faint hum if there is some obstruction or if the cooler is not level, but otherwise the cooler will operate unobtrusively in any living environment.

In addition, the lack of moving parts means there is virtually no vibration throughout the cooler. If you're aging wine long-term, you won't have to worry about continual shaking that can disturb the sediments in the bottle, and potentially ruin the flavor.

A compressor cooler, of course, is a refrigerator, and a refrigerator's compressor can be very noisy when it is in operation. These units are not the best choice if you're looking for something to use in a quiet living space. 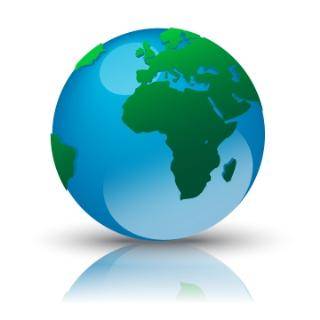 Cooling units that use vapor compression refrigeration, which include freezers, air conditioners and wine coolers, depend upon a chemical coolant to function as a heat sink and carry heat from one location to another. In the early days of refrigeration technology, refrigerators used ammonia, but that substance can be highly toxic to humans. Next came Freon, a chlorofluorocarbon that turned out to deplete the ozone layer in the Earth's atmosphere. In the last two decades, a lot of science has gone into manufacturing substitute refrigerants, and those in use today are much less destructive than their predecessors. But these coolants still emit greenhouse gases in the atmosphere and contribute to global warming.

In addition, refrigerants are a hazardous waste that must be disposed of properly - discarding an old refrigerator can lead to serious consequences for the local environment and human health if the refrigerant leaks into the soil or water supply.

Thermoelectric wine coolers, on the other hand, have no harmful substances or emissions. The components of a thermoelectric system are no more dangerous to the environment than any other electrical device. When it's time to dispose of one, you should consider recycling, but you don't have to worry about hazardous substances.

So how do you choose between one type of wine cooler and the other? Ultimately, it's a matter of personal preference, budget and the particular demands of your wine collection.

It's up to you to weigh the advantages and disadvantages and make the best choice for you. If you need help, our customer service reps are here to provide assistance whenever you need it.